Eufy Genie Review: How does it compare to the Echo Dot?

Anker’s home brand — Eufy — is getting into the smart speaker game with the Eufy Genie, powered by Alexa. So how does it compare to the Amazon Echo Dot?

Note: Please refer to the bottom of this article for new feature updates since the original review.

The speaker on the Eufy Genie is better than the Echo Dot’s speaker, but not as good as the original Amazon Echo.  The Eufy Genie’s speaker is clearer and louder than the Dot, but is lacking bass and gets tinny at high volumes.  However, it is acceptable for listening to music at medium to low volumes, just don’t expect Bose quality sound.

The Eufy Genie performs many of the same functions as Amazon’s Echo line of speakers.  It can tell you jokes, read you the news, control your smart home gadgets and play music from Amazon, iHeart Radio and paid Spotify subscriptions.  You can use the Amazon Alexa app (available for Apple, Android and Kindle tablet devices) to configure the services for the Eufy Genie.

I noticed some bugs while using the Eufy Genie.  When issuing a command, such as “play iHeart Radio,” Alexa’s response would sometimes be garbled and drop out.  However, the music would play as normal.  Hopefully, this can be addressed in a future software update to the Eufy.

Official Echo devices have a “smart listening” feature where, if you have multiple Echo devices in your house, it will sense which one is closest to you and the other Echos will not respond if they are within earshot.  The Genie does not have such a feature, and I can hear the Genie responding even if I’m on another floor and a closer Echo device has already handled the request.

The Eufy Genie has a small footprint and sits just a bit higher than the Echo Dot.  It’s small enough to set on an end table or a shelf.  The white “Eufy” logo on the top of the unit lights up when it hears “Alexa” and stays on for about 30 seconds afterwards, which is an important consideration if you plan to place this in a bedroom.  A blue LED ring will light up when Alexa hears her name and begins listening.  It lights up “red” when Alexa is muted and “orange” when Alexa needs to  be configured.  The unit is powered by a 5V 2A wall adapter with an integrated Micro USB cable which connects to the Genie.

The microphone does a great job at picking up my voice from across the room.  As with the original Echo, Alexa sometimes has a hard time hearing if there is music playing.  It helps to shout “Alexa” first and then wait for her to lower the music before giving your command.

The Eufy Genie also feature a mute button for times when you don’t want Alexa to be listening, as well as volume controls and a “Action” button for manually invoking the voice recognition.

Unfortunately, the Eufy Genie cannot be paired with Bluetooth devices.  This means that you cannot pair your phone to it to play music, and you cannot pair it to a Bluetooth speaker with better sound quality.  However, there is an Aux Out port on the Genie and a cable is included to connect it to an external speaker’s Aux In port.  For example, I connected it to my Anker SoundCore speaker and it worked great.  Please note that the Eufy Genie will still listen with its built-in microphone and it will not use a microphone on an external speaker.

Interestingly, the Eufy Genie does show up as an AirPlay-compatible speaker on my home network.  This allows me to stream music from my iPhone wirelessly to the Genie’s speaker.   This is an undocumented feature, but I hope the Eufy team decides to keep it when the Eufy is inevitably updated in the future.

Important Things to Know When Buying the Eufy Genie

The Eufy Genie is about the same size as the Echo Dot and has slightly better sound quality. It'll will save you some money while giving you most of the functionality of Alexa. However, it is lacking some features of the Dot, such as Bluetooth connections intercom calling. 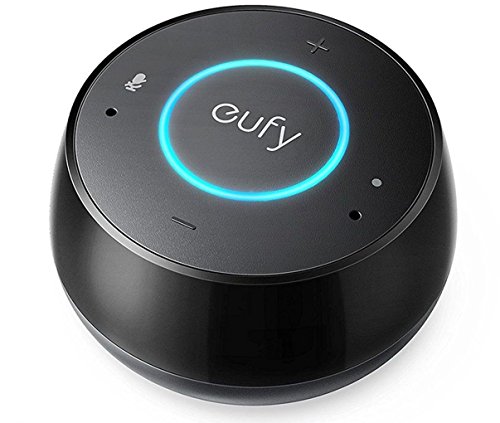 Eufy Genie without Bluetooth ( only for iOS)

Benefits of Himalayan Salt Lamps (and a Special Offer from Dodocool!)