It’s important to note that the prongs on the Amoner wall charger do not fold, which makes it slightly less convenient for travel. However, given the compact size, this likely will not be an issue for most people.

Unlike the stock Apple wall charger, the Amoner wall charger features two USB ports that can both provide up to 2.4 amps of power, even simultaneously (so 4.8 amps total). This allows you to charge most 2 tablets, including iPads, at Their full speed (the exception being the iPad Pro, which can charge slightly faster with an 18 watt USB-C charger).

Of course, you do not need to charge two tablets. You could charge two phone or a combination of a phone and tablet, or even other devices such as Bluetooth speakers and headphones.

There are two chargers included in the pack, allowing you to charge up to four devices total using two AC outlets. This two-pack is handy as you can keep one charger at home and the other at the office, for example.

Visit Amoner’s website to check out some of their other offerings!

The Amoner wall charger is a simple and compact 2.4 watt charger capable of charging most phones and tablets at a fast speed. There are two units included in the pack, making it a good value for keeping your devices charged. 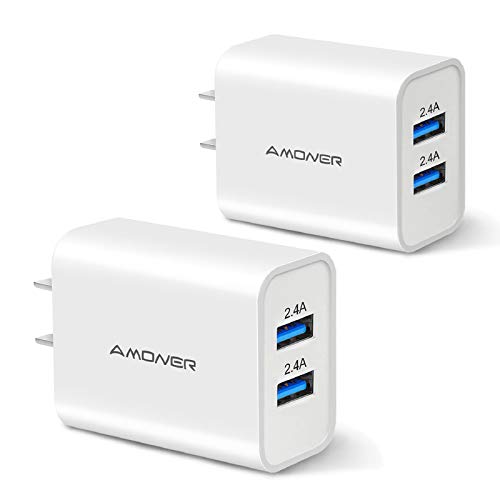