To test out the new Nebula Astro projector, I invited some friends over for an outdoor marathon of The Office on the deck.

One of the coolest aspects of the Anker’s new Nebula Astro projector is the small size. A little larger than a navel orange, the Astro is only 3.6″ high, 3.2″ in diameter and weighs less than a pound. In fact, although I had the projector already setting on the table, one of my friends asked, “Where is the projector? That’s it?!”

The minimalist design is geared toward kids with a fun, colorful UI to navigate the installed apps. You can even select a fun background and add your child’s name to the interface.

On the back of the Astro projector, you can find a USB-C port for both charging and USB storage and an HDMI input.

Despite its small size, the projector was bright enough to adequately fill my projection screen and provide plenty of visual clarity to the show. There is no automatic focus feature like is found on the Mars II, so you must use the small dial located near the front of the Astro to sharpen the image. Anker states that the maximum projector distance is 10 feet, which I found to be accurate (although, closer is brighter, of course). I found 6-8 feet to be the “sweet spot” in terms of size and brightness.

The maximum resolution for this projector is 480p, so although the picture is good, don’t expect to see the HD quality you’re likely familiar with seeing on your TV. However, the picture is still quite adequate kids and likely most adults as well.

Unfortunately, like the other Nebula projectors, the Astro isn’t “officially” certified by Google, so Google Play Services are not present on the Android 7.1 operating system, which leaves many of Google’s own apps unavailable for installation on the Astro. It is also missing an official blessing from Netflix, so Netflix content only streams at a low resolution as well. This isn’t a huge deal for kids, but adults will likely notice the blocky resolution, especially when projected onto a large screen.

Many of the apps, such as Netflix, don’t support the Astro’s physical remote control. When using the apps, you’ll need to open the companion Nebula app on your phone to engage “mouse mode” which simulates touch input for the Netflix app. The Nebula app also has a keyboard which makes typing logins into the Astro much more easier than using the remote control.

The Nebula Astro can achieve up to 2.5 hour of battery life when utilizing the battery-saver option in the Settings menu (which dims the light output), but I found normal use to be around 1.5-2 hours (typically enough to get through a movie). Thankfully, the projector accepts a 5V 2A input, so you could use one of Anker’s power banks to keep the projector charged while outdoors.

The Anker Nebula Astro is a small yet powerful projector with a kid-friendly interface, built-in streaming apps and "Eye Guard" technology to turn off the lamp if someone is in front of the projector. However, the resolution is limited to 480p and the app selection is somewhat limited. 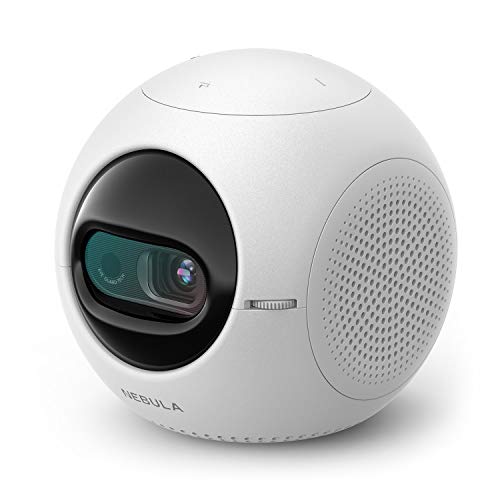