Will Smart Watches help us watch our health?

We’ve seen the release of the Pebble smart watch and rumors are swirling about a possible iWatch, but will these new devices become the next big thing for our health?

I think back to the Saturday morning cartoons of my youth, and watching Dick Tracey talk into his magical phone watch. While I’m a little disappointed that these aren’t widely available yet (along with the lack of hover boards promised in Back to the Future), the upcoming “smart watch” devices look promising for keeping better track of our health.

One of the first contenders in the smart watch arena is the Pebble watch.  As a Kickstarter project, the Pebble watch promises to integrate with our smartphones and provide a variety of its own applications, such as logging cycling and running activities.  It will also serve as a sort of “second screen” to your smartphone, notifying you of incoming calls, new emails, text messages, and tweets.  It’s not quite the Dick Tracy watch, though, as you can’t talk into it (maybe a future version?).  At this time, it looks like the actual activity tracking will still happen on your smartphone, but the watch’s screen should be easier to access while in the middle of the activity. 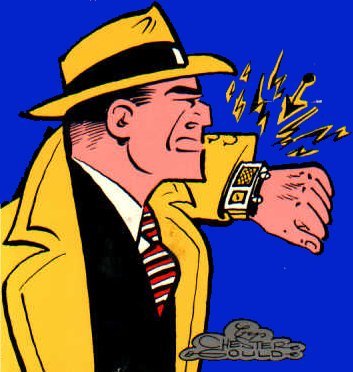 Maybe soon to join the arena is Apple’s possible iWatch.  Bloomberg reports that Apple has a team of around 100 designers working on some type of “wristwatch-like device that may perform some of the tasks now handled by the iPhone and iPad”.  The iPod nano is already known for supporting the Nike+ fitness application (plus, Nike already makes their Nike Fuelband activity tracker), so it will be interesting to see what Apple brings to the table in terms of fitness tracking.  Having a GPS chip and your music directly in the watch would make activity tracking a lot easier (no need to strap your phone to yourself), but only time will tell what features this watch will include.

Whatever the horizon brings, it appears that smart watches will help make us more conscious of our health and maybe become a bit more active.  You know what would really make us more active?  Hover boards.

FitBit One Review: The FitBit is It