Anker PowerPort Atom PD 2 Review
$49.99
Buy this item
60 watts of power (when one port is in use)
Two ports
Foldable prongs

Anker’s continuing their development of chargers utilizing gallium nitride with the PowerPort Atom PD 2 charger. How does it perform?

The Anker PowerPort Atom PD 2 is smaller than many similar 60W USB-C chargers, including Apple’s 60W MacBook charger. This is thanks in part to Anker’s use of gallium nitride instead of silicone, allowing them to fit components in smaller spaces

The charger features two USB-C ports, allowing you to charge two USB-C devices (such as laptops, phones, tablets, etc) at the same time. A soft blue LED above the charging ports lets you know that the charger is receiving power, but does not indicate the status of the devices it is charging.

The unit is larger than the one port Atom PD 1 charger and is about the same size as the original PowerPort 2 charger.

The unit complies with the USB-C Power Delivery standard and allows you to charge many laptops, phones and tablets. It can fast charge the iPhone 8 and up if you have a USB-C to Lightning cable that Anker also makes (but is not included with this charger).

The charger features a technology that Anker calls “Intelligent Power Allocation“. This means that if you’re only using one port, it will receive 60 watts of power. If you’re using both ports, it will split the power 30/30 between the two ports. Unfortunately, it is a hard 30/30 split: if one device is only using 18 watts, the other device still caps at our a maximum of 30 watts. Therefore, if you need all 60 watts to charge your laptop, for example, then you’ll one to make sure to have only 1 device plugged into the charger.

This charger also has foldable prongs, making it ideal for backpacks and travel.

Unfortunately, there are no USB cables included with the charger, so you’ll need to use your own.

Please note that the following tests were performed when using just one port of the Anker PowerPort Atom PD 2.

My Acer R13 Chromebook is not compliant with the USB-C Power Delivery standard, however the Anker PowerPort Atom PD 2 was able to charge it anyways. The stock charger can reach 45 watts (20V – 2.25A) while the Atom PD 1 provided 41 watts (14.5V – 2.86A). This Chromebook struggled with other Anker PD chargers, so I was happy to see it work with the Anker PowerPort Atom PD 2.

The Dell Latitude 5590’s stock charger is 65 watts. Although the Anker PowerPort Atom PD 2 only outputted about 40 watts (19.2V 2.12A) to charge the laptop in the photo below, the laptop did recognize it as a 60 watt charger (and complained that the 60 watt charger was not a “full speed” 65 watt charger). Despite the message, the laptop continued to charge while in use.

Starting with the iPhone 8 and including the iPhone X, iPhone XS and iPhone XR, you can use a Power Delivery charger (and a USB-C to Lightning cable, which needs to be purchased separately) to fast charge your iPhone to 50% in as little as 30 minutes. For more information about this, please refer to the Apple support article regarding fast charging. The Anker PowerPort Atom PD 2 supports the Power Delivery requirements needed for fast iPhone charging.

At a size smaller than a 60W MacBook charger, the Anker PowerPort Atom PD 2 can charge two MacBooks at the same time. However, when charging 2 devices, the power is split at a hard 30/30 watt split (meaning if one device is only receiving 18 watts, the other device is still capped at 30 watts). Foldable prongs make the charger ideal for travel. 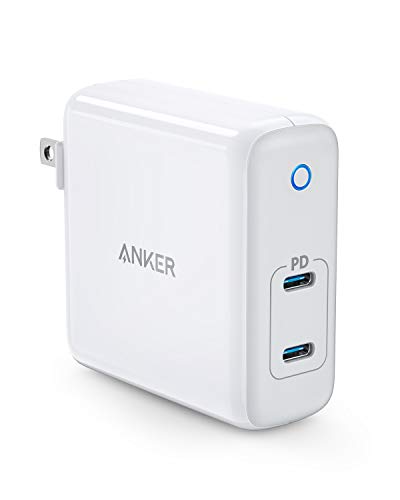