AirTV - 8 GB 4K Streaming Media Player with Adapter...
Cut The Cord with AirTV Player. Stream movies, TV, music and other content using a wide range of apps, including Netflix, SlingTV, Google Play and many more from the Google Play Store all with AirTV Player. AirTV’s streaming platform integrates local over-the-air (OTA) programming with your...
in stock

This device is aimed at cord cutters who can receive their local channels (like ABC, CBS, NBC, etc) by antenna. You can purchase the AirTV bundled with a USB dongle that connects to your antenna and allows you to watch your local channels in HD from the AirTV box.

Why would you want to do this? This saves you an extra step of changing the input on your TV from “Antenna” to “HDMI 1” (for example) every time you want to switch between local channels and a streaming app.

However, while the AirTV does support other streaming apps like Netflix, it’s mainly aimed at people who subscribe to Sling TV. Now you can use it without a subscription to Sling TV, however, you must go into the Sling TV app on the box to watch your local stations, then exit the Sling TV app if you want to open Netflix or YouTube, for example. If you’re not a Sling TV subscriber, you can expect to see a huge banner ad for the service every time you open the Sling TV app. 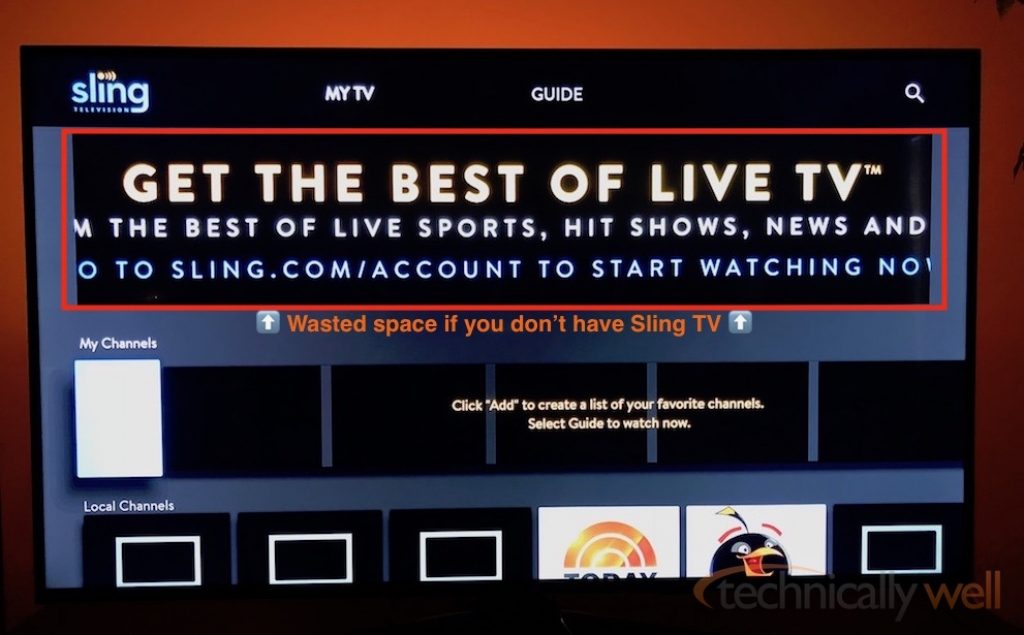 The AirTV uses Android TV at its base, so you can install other Android TV-compatible apps (such as Pandora and Pluto TV). It also acts as a Google Chromecast. You can start watching a video on your iPhone or Android phone, then use the “cast” icon to send the video to the AirTV. This feature has always been finicky for me (even with an actual Google Chromecast device) and videos sometimes simply do not play on the TV when I attempt to “cast” them. Therefore, I don’t plan to use the feature often, but it’s nice to know it’s there.

One of the main glaring omissions of the AirTV right now is the lack of a DVR feature, but this is supposedly coming in the future.

The remote is somewhat oversized and a little awkward to hold, but it does have a surprisingly soft back. At the top of the remote is a dedicated Sling TV button that takes you into the Sling TV app (where your local channels are found as well).

While watching local TV, you can press the “up” button on the remote to open up a mini-guide along the bottom of the screen. This is one of my favorite features as it allows you to see what else is on locally. You can instead press the “down” button to open up a full screen guide, but I prefer using the mini-guide.

The remote also had a dedicated Netflix button which makes switching over to the Netflix app fast and easy. There is also a Google button that opens up the Google Assistant and turns on the microphone (also located on the remote). However, activating the Google Assistant has been hit or miss for me. Sometimes it will open the white Google Assistant screen but it won’t be listening, and sometimes it is listening but their is no visual indication to let me know.

The remote can also be setup to control your TV power and sound bar volume (the initial setup process will walk you through this). This is convenient as you can power on both your TV and the AirTV box with one button press.

The AirTV is capable of a 4K resolution, so I tested this out by using the built-in Google Chromecast feature to play a 4K YouTube video. The AirTV did a great job of playing this video and delivered similar quality to my Samsung TV’s built-in 4K YouTube app.

The picture quality of local TV stations (through the antenna dongle) was also very good and comparable to using the “Antenna” input on my TV. I did notice some occasional picture stuttering when the AirTV seemed to be doing something in the background (for example, if I recently loaded the guide, the picture could stutter for a few seconds afterwards).

The signal quality from my antenna seems to be weaker through the AirTV. For example, my local NBC station is far away from my home and occasionally pixelates every 15 minutes or so when the antenna is directly connected to my TV. Attaching the same cable to the AirTV resulted in more frequent pixelations (like every 5 minutes), which leads me to believe that the receiver in the AirTV is not as tolerant to interference as my Samsung TV.

The AirTV is ideal if you subscribe to Sling TV and have an existing antenna that can receive local stations. Many streaming services such as PlayStation Vue and YouTube TV are including local TV stations as part of their channel lineup, making an antenna less and less necessary. However, PlayStation Vue and YouTube TV cost about double of what Sling TV's base plan costs, so you could save yourself some money by combining Sling TV with an antenna if you live in an area with good reception.

AirTV - 8 GB 4K Streaming Media Player with Adapter...
Cut The Cord with AirTV Player. Stream movies, TV, music and other content using a wide range of apps, including Netflix, SlingTV, Google Play and many more from the Google Play Store all with AirTV Player. AirTV’s streaming platform integrates local over-the-air (OTA) programming with your...
in stock