Wii Fit U Review: Is it the Workout We’ve Been Waiting For?

When the original Wii was released in 2006, it was the answer to many parents’ prayers: kids were finally getting off the couch and getting some exercise while playing video games.  Nintendo saw that potential and expanded upon it with the Wii Balance Board and Wii Fit game a couple years later.  While I liked the concept, Wii Fit wasn’t exactly a hardcore workout.  Does the transition to the Wii U change that?

Let’s start with the Balance Board.  While it’s a good concept, I’m not sure it’s the best medium for working out.  You can’t run on it.  You can jump on it.  Therefore, aerobics are out.  It’s not that heavy, so you can’t really use it for building muscle, either.  Sometimes, I wonder if Nintendo would have been better off reviving the Power Pad! 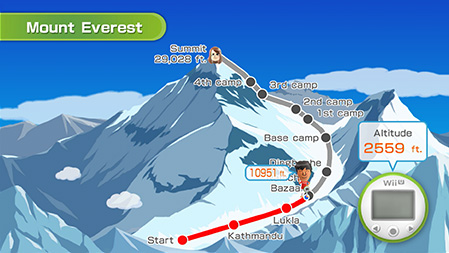 The Balance Board does come in handy for Yoga workouts.  It can tell you if you’re shifting your weight in the right direction during the Warrior pose, for example.  It also provides eye-opening statistics during the body test, where you can tell where you tend to shift your weight while at rest.  And, of course, everybody’s favorite feature of Wii Fit is the Balance games, which rely on the Balance Board heavily.  So while it does have it’s applications, working up a real sweat isn’t one of them.

Thankfully, Wii Fit U recognizes that you want to work out — really work out — outside of the Wii Fit U game, and gives you the option of the Fit Meter.  Like the Fit Bit, the Wii Fit Meter records your steps throughout your day, as well as acceleration (intensity) and atmospheric pressure (altitude) changes.  The Wii Fit Meter lets your track your progress against real world courses, such as a running trail in New York City or a climb up Mount Everest.  It also adds credits to that little fitness piggy bank you’ll recognize from previous versions of Wii Fit. 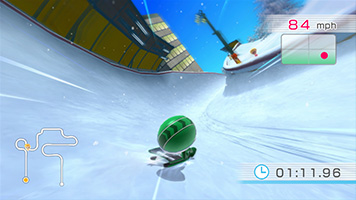 The gameplay of Wii Fit U is more of the same: there are the same games everyone loves, such as skiing and butting soccer balls with your head (although, what happened to my favorite game – snowboarding – from the original Wii Fit?!), as well as some new ones, such as my new favorite: the Core Luge.  There’s also a whole new dance mode that helps you get in some more cardio, and provides another good application of the Balance Board (as a side note: you also need to hold two Wii Remote controllers that have the Motion Plus enhancements).

Navigation is still frustrating.  When you start an activity, you’ll sometimes see the message to put down the GamePad, immediately followed by a message to press “A”, requiring you to pick up the GamePad.  Some games allow you to watch a video feed of yourself doing the exercise, which is actually really helpful, but requires you to quickly place the GamePad on the stand and point it at yourself at the right angle, which can be a hassle when you’re trying to get through your workout.  There are still the leaderboard and piggy bank screens you have to click through after each workout, although, if you create a “routine”, the transition is a little more streamlined, but still requires some button presses between activities.  This disrupts your workout and sometimes creates too long of a cool down period between workouts.

The second screen of the GamePad really comes in handy during the Strength Training workouts.  You can set the GamePad on the floor so you don’t need to bend your neck trying to figure out where you are during the Pushup and Side Plank workout. 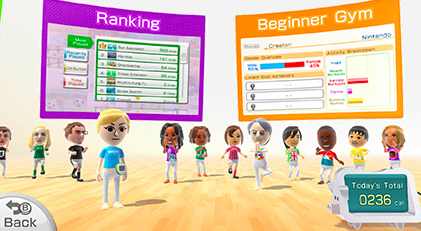 I was looking forward to the new social integrations, but I’m still trying to figure them out.  There are multiple gym “communities” you can join, such as Casual, Wellness, and Active. However, if you check out the communities on MiiVerse, it seems to just automatically post whatever activity you just did.  When I tried to create a new post in the community through MiiVerse, it wouldn’t let me.

Despite some shortcomings, the Wii Fit U is still a great game,   UPDATE: This promotion is now over.  You’ll now need to purchase the full game.  The new activities are definitely fun, even though you still need to deal with the annoying button presses between workouts.  Because of this, it can take a significant amount of time to burn the same amount calories you would get from other activities.  And since you can’t run or jump on the Balance Board, this can prevent you from really getting your heart pumping enough to break a sweat.  So while the Wii Fit U may not be a P90X-style workout, it’s still great for beginners or those who want to get in a second workout and have fun doing so.

Check out Wii Fit U on Amazon