Wii Fit U Coming This Fall

The Nintendo Wii has always been associated with being more active, so naturally they developed a game dedicated to fitness – Wii Fit and the Balance Board – in 2008.  Now, the game is getting us off the couch again with new features, HD graphics, and a FitBit-like device.

I’m a huge fan of fitness video games.  In fact, I turned to the EA Sports Active series a few years ago when I had some extra pounds to lose.  However, the original Wii Fit seemed to underwhelm: while the games were fun, I had a hard time working up a real sweat.  And navigating between workouts was tedious and took too much time, so you would pretty much be cooled downed before doing the next workout.

However, Wii Fit is back on the new Wii U console, this time with a new activity monitor that tracks you throughout the day, not just when you’re in the game.  You can then sync this Fit Meter with the game to check out your progress. 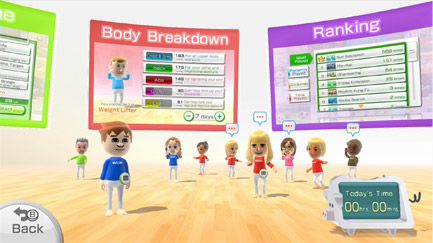 Wii Fit U also adds new elements, including dance workouts and 19 new activities.  In addition, it incorporates new “Gym Communities” that allows you to socialize with other players and stay motivated.

If you already have a Balance Board collecting does from the old Wii Fit days, you can download a free trial of Wii Fit U starting November 1st.  If you then purchase the new Fit Meter at $19.99 MSRP, you get to keep the downloaded Wii Fit U software.  This isn’t a bad deal, figuring that you would be out $49.99 MSRP for the retail version of the Wii Fit U software and Fit Meter.

The price point for the Fit Meter is also interesting.  While not as small and discreet as the FitBit, it does come at a fraction of the cost.  However, there’s no word if there will be a web interface to your stats and it appears the syncing will be through the Wii U’s infrared port only, which cuts down on the convenience factor tremendously.  So I’ll likely be sticking with my FitBit, but it’s good to see more players in the fitness game arena.