The Apple Watch: Will It Help Us Lead Healthier Lives?

After years of speculation, Apple today officially announced the Apple Watch.  The stylish watch will show us our calendar, alert us to new texts, check our email, and even tell us the time.  The Apple Watch also has some interesting health tracking sensors.

The Apple Watch includes several LED sensors on the underside that detect your heart rate.  These sensors work in conjunction with a built-in accelerometer and the GPS and WiFi features of your iPhone to measure your physical movement throughout the day.  For example, the Apple Watch can sense when you simply stand up or when you’re embarking on an intense run. 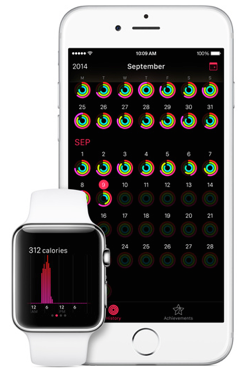 The new smart watch also includes a Workout App that shows real-time stats like calories, distance, time, and pace while you run, walk, cycle, and more.  These “official” workouts are combined with your casual activity throughout the day and are presented to you on the Activity app, where you can see your activity over time.  And the Health app allows you to share your activity data with third-party health apps.

The Activity app on the Apple Watch provides a simple graphical representation of your daily activity and includes three rings: move, exercise, and stand.  The “move” rings represents how many calories you’ve burned.  The “exercise” ring shows how many minutes of brisk activity you have done.  And the “stand” ring represents how often you’ve stood up to take a break from sitting.  After all, sitting is the new smoking, or so they say.

Overall, the Apple Watch is a great tool for health-conscious consumers.  Plus, the Apple Watch boasts many other features as well, such as a built-in speakerphone for phone calls (and a special “Walkie Talkie” app), subtle tactile alerting to new notifications, and the ability to send quick nudges and drawings to your Apple Watch-wearing friends.  You can even use the Apple Watch to make payments with the new Apple Pay system.  The Apple Watch will be available in early 2015 starting at $349.