You’re likely most interested in the sound quality of the Sony SRS-XB31.  If you love bass, it definitely does not disappoint. Highs and mids come through clear and bass has some kick to it (more on that in a second). Streaming music from Apple Music and Pandora both sounded great, but the speaker does tend to over emphasize low frequencies and can sound “muddy” at time, expecially with the bass enhancement feature on.

Using Sony’s Music Center app, you can also access the “Live Sound” feature that Sony states will provide a more 3D sound experience with “festival vibes.”  Well, I’m not sure about the festival vibes, but what I found is that it does is maintain the bass of the “Extra Bass” mode while increasing the volume and enhancing some of the mids.  It definitely sounds good and I actually prefer it over the “Extra Bass” feature.

Sony’s Bluetooth speakers tend to be bass heavy and that’s definitely the case with the SRS-XB31.  Unlike last year’s model, there’s no dedicated “EXTRA BASS” button.  You can turn the Extra Bass feature on and off using the Sony Music Center app, or by holding down the Volume Down and Play buttons for 3 seconds, until the power indicator changes colors. 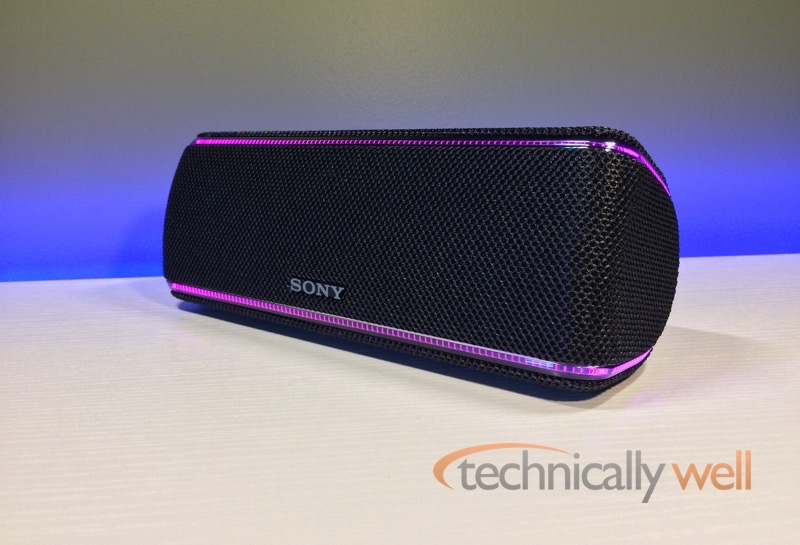 The SRS-XB31 gives you up to 24 hours with the lights off and with the sound mode set to “Standard”.  However, with the lights on and the Extra Bass feature enabled, you can expect more like 4 to 6 hours of battery life.  So definitely keep that in mind if you’re trying to plan an all-nighter.  You can check the battery status in the Sony Music Center app on by tapping the Battery button under the flap.

Sony's new SRS-XB31 speaker features great sound, party lights and (finally) Micro USB charging! The optional "Extra Bass" setting does a great job of kicking it up a notch if you're all about the bass and it can be paired with other Sony speakers if you want to get loud.