Being able to charge your laptop with a power bank is very convenient when you’re on the go, so let’s review how the Omars 10000mAh Power Delivery power bank performs with various gadgets.

An aluminum enclosure surrounds the power bank, giving it a premium feel and considerable durability. Due to the additional circuitry to support charging at different voltages, this power bank may be a little larger than other 10000mAh power banks you have seen.

There are two regular USB ports on the top, as well as one USB-C port that serves as both a Power Delivery output as well as an input to charge the power bank itself.

This power bank features an LED display that shows you the precise charge level. When you are charging the power bank, the right-most digit will blink to let you know that the power bank is receiving a charge.

When charging another device, such as a laptop, you may notice the numbers decrease at a somewhat fast pace. This is most likely due to the energy loss when converting to the different voltages and is to be expected. With that said, you may not realize the full 10,000 mAh capacity as there will be a sizable energy loss as this power bank converts the 3.7V battery cells to a 5V, 12V, 14.5V, and 20V ouput.

In addition to USB-C Power Delivery, the orange USB port on the power bank supports Quick Charge 3.0 for smart phone that support the technology.

You can also charge other devices such as iPhones, iPads, and Android phones using either full-sized USB port, which output up to 5V 2.4A.

The Dell 14-inch Chromebook charged almost as quickly as the stock charger. The stock charger can output 45 watts (20V – 2.25A) while the Omars Power Bank charged at about 22.5 watts (15V – 1.5A). However, at this level, the Chromebook still seemed to gain a charge while I used it at the same time (albeit slower than using the wall charger).

My Acer R13 Chromebook is not compliant with the USB-C Power Delivery standard, and unfortunately, this power bank was not able to charge it. Instead, the power bank itself charged from the Chromebook instead of the other way around. The manual for the power bank does not provide instructions for reversing the power flow, and despite my different button presses, I could not find a way to reverse it either. To be fair, the Omars Power Bank does not advertise to charge non-compliant Power Delivery devices.

The Omars Power Delivery Power Bank allows you to charge most PD-compliant laptops. Due to power conversion, the full 10000mAh capacity may not be realized, and non-compliant Power Delivery devices may actually charge the power bank (instead of the other way around). 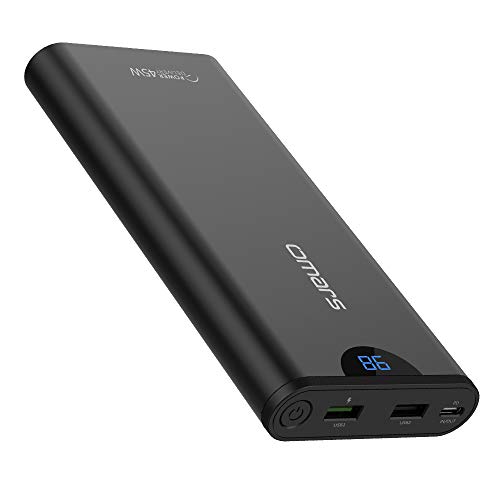