The camera also supports encoding to both the H.264 and space-saving H.265 standard.  The camera also has some additional shooting modes such as time lapse and slow motion.

You’ll likely want to leave this set to 4K 30fps for the highest picture quality, which looks very good on my 4K television.  The 4K resolution shows a great amount of detail in the video (I could easily read street signs in the distance).  It also takes up a good deal of space: 1 minute of 4K recording takes up about 450MB of space, so be sure to purchase a large memory card to go with it.

At 30 frames per second, you don’t get that buttery-smooth soap opera effect you would get at 60fps, but you can set the camera to 1080P 60fps if you don’t care about the 4K resolution.

Image stabilization does help with camera jitter, but it doesn’t completely eliminate it and doesn’t replace a gimbal.  Give this camera to a kid and you’ll still likely need some Dramamine to get through an entire recording.  However, I was surprised that the video I took out a car window while holding the camera was very watchable.

Low light performance does suffer from significant “muddying” of the image as the camera tries to reduce the noise.  So this camera would be best for daylight recordings.

The built-in mic quality isn’t the best, but it’s better than nothing.  While it’s OK for a soccer match, you won’t want to use this to record a concert or piano recital.  Using the waterproof case will reduce the sound quality even further, as expected.

The camera starts up very quickly and is ready to record.  There is a slight delay between pressing the shutter and when the recording starts, so be sure to factor that into your “…and GO!” announcement.

You can transfer video directly to your phone with the camera’s built-in Wifi.  First, download the iSmart DV app to your phone.  With the Akaso camera on, hold down the shutter until your see a white screen on the camera.  The WiFi information will be displayed on the camera’s screen.  Then, go to your phone’s settings and connect to this WiFi network.  Once your phone is connected to the camera’s WiFi, you can open the iSmart DV app and use your phone as a viewfinder or transfer recordings to your phone.  Just be aware that the large 4K recording take a few minutes to transfer and having the camera’s WiFi on eats through the battery quickly, so you may only want to use this option in a pinch.  I experienced occasional disconnects and failed downloads periodically while using this feature, so I typically remove the Micro SD card and insert it in an adapter for my computer when I want to transfer videos. 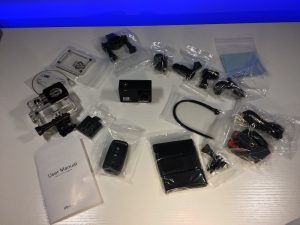 The camera’s package includes a Bluetooth remote control allowing you to take photos and start/stop video recordings for your selfies.  You need to manually power the remote on each time you use it by holding down the red circle button.  It will automatically turn off when you turn off the Akaso camera.

The date and time on the camera doesn’t seem to be maintained when changing out the rechargeable battery.  I’ve turned off the date and time stamp in my videos, but this still affects the video file’s metadata and may make your video files appear out of order when loaded into a photo management program such as macOS’ Photos app.

Whether your vlogging or simply recording some videos while at the beach on vacation, the Akaso V50 is a great value and can save you quite a bit of money over a GoPro.  The image quality is sharp and detailed and the camera is easy to use.  The WiFi download feature is a little hit or miss and the date and time is not consistently maintained, but if you can overlook these issues, the camera does an impressive job at this price point.

The Akaso V50 4K action cam is a great value and can save you quite a bit of money over a GoPro.  The image quality is sharp and detailed and the camera is easy to use.  The WiFi download feature is a little hit or miss and the date and time is not consistently maintained, but if you can overlook these issues, the camera does an impressive job at this price point. 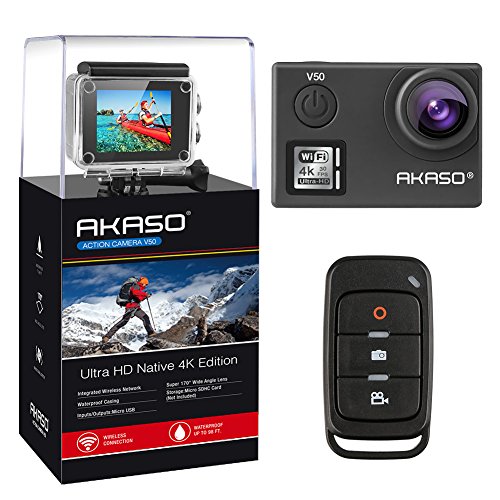 How many watts should my USB charger have?